When I was almost eleven years old, I picked up a book in Davis Kidd Booksellers, where my grandmother regularly took me to find something new to feed my insatiable appetite for stories. On the cover was a boy in glasses riding a broom almost directly into the ground while a unicorn ran away in the background. I cracked it open to read the first few, dull lines about a perfectly normal little burg in England. I’m incredibly grateful that I didn’t stop there. Midway through the chapter, I could see the magic leaking into the scene, as one character put streetlights out with the flick of a small device and another turned from a cat into a stern-looking woman. A moment later, I knew that a one year old’s parents had been murdered, and, then, that the boy was being left with his relatives. Almost at the end of the chapter, I thought the story was interesting, but nothing special. Ready to set the book back on the shelf, I read the final line of the chapter. It was this line that I would often remember for the next twenty years when life seemed to be at its worst. Speaking about Harry Potter, a newly minted orphan, sitting alone on the doorstep of people who would never really care for him, it says this:

He couldn’t know that at this very moment, people meeting in secret all over the country were holding up their glasses and saying in hushed voices: “To Harry Potter – the boy who lived!”

The boy who lived. How could I know how important that title would be to me? It fascinated me then that there would be a hero who was not famous for his strength or wisdom or bravery. I thirsted for those attributes, as I had seen them in nearly every book I had read to date. I was a boy who turned to books because I was weak and small and lonely. I wanted to be strong, wise, and brave because people who are all of those things have friends who not just hear but listen to them when they speak, and the time they spend together is intimate and cherished. The people who are none of those things are forgotten in the chaos of life, people like me.

As I grew, Harry did, too, and every year brought new challenges and lessons for both of us. Through those books, I learned real truths about the world around me. In those first few years together, I learned that every triumph comes at a cost and that the right thing to do and the easy thing to do are rarely the same. As a teenager, I found that peoples’ trust in you is only as good as your reputation and your reputation can be as easily damaged by others’ fear and envy as by your own carelessness. When I was twenty, I read the final book, and finally understood something that had eluded me through the decade between that first moment in the book store and this one.

I, like those nameless people in the first chapter of the first book, had thought the boy who lived referred to a single event, but Harry is not the boy who lived once. He is the boy who continues to live, through every hardship, loss, and cruelty that life can throw at him, and, in it all, he is not endlessly resilient. He breaks like you or I do, but he always knits himself back together with the scars showing. He wears them like badges of honor.

There is an art known at Kintsugi where they take a piece of pottery that has been broken and glue the pieces back together with lacquer containing gold dust. In breaking 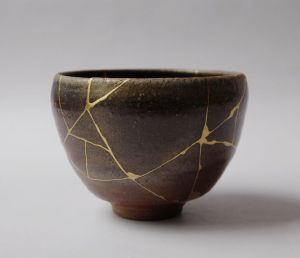 and being reformed, the piece is transformed from something common into something truly special. The fix does not hide the broken places. It highlights them. It says to the world that it is not nor will it ever be the same as it was, but there is no shame in its brokenness. From that first night as a baby, Harry carried a scar on his forehead, a constant reminder of the parents he would never know. Throughout the series, he collected more scars, not all of them outwardly visible. He gained and lost a godfather, as well as friends and mentors, whose losses he suffered for both good, noble reasons or, as is often the way of things, no discernible reason at all. He carried more scars on his heart than he ever did on his skin, and, through it all, he continued to live up to his title.

A year before I read the final book, I had been in the hospital for my heart, a condition that they could never adequately explain. It set off an anxiety disorder in me that would plague me for years, and, to this day, still rears its head when I am least prepared. In the decade since then, my heart has broken many more times, though a hospital stay could cure none of these, each time falling from a higher precipice of hope and shattering more completely. In these times, I think back to that first chapter I read in the book store. I think how I often I feel just as weak and small and lonely as that eleven year old boy, and I think about what Harry tried to teach me for a decade. When you are broken, gather up your pieces and glue them together with gold. Let them see that you are not nor ever will be the same as you were, but there is no shame in your brokenness. Not everyone will understand, but those that have the eye for it -perhaps with hearts laced with gold themselves- will see that you are more than a boy with a scar. They’ll know that you are the boy who lived.